Alice's Analysis Close But Not Too Close, Multi-Generational Living

Well, good afternoon, real estate fans, Alice Lema here, broker John L. Scott here in Southern Oregon. Here with another podcast regarding what's going on in Southern Oregon real estate.  Today is April 9th. So we're just a clip, clipping through the spring time here. Things are beautiful. It's cold, sometimes hot, sometimes typical Southern Oregon weather, one of the things,  that's coming up, this week quite a bit more than it used to, although it's been kind of percolating for a couple of years, is the idea of the multi-generational living situation.

[00:00:39] I'm starting to see more and more news articles outside of the real estate journals, talking about this, the, the technical marketing term is called bundling, quote, unquote. You have, different kinds of people living together on purpose, for a common goal. And so I'm in a situation with several families right now, where we're out looking not only for large properties that have lots of bedrooms, Sometimes because they're going to do homeschooling and work from home and have multi multiple people live there. But also sometimes just so they can have a little more elbow room and keep to themselves, but still have their family close by.

[00:01:19] You know, that shut down we had last year, I think really brought it home to a lot of us that we feel vulnerable . Or our elders are maybe vulnerable. We don't have our grandbabies nearby. And so a lot of people are getting out and trying to figure out how to live together. But it creates, some interesting conversations because not everybody really does want to be under the same roof.

[00:01:44] So I just want to kind of tick off some, you know, maybe two or three possible floor plans and, and dwelling ideas to consider. And even if you're not living with, your family, you could also use this as a kind of de facto rental model. Where you're living in one part of the house, but you've rented out your master or you're living upstairs and you rent out the downstairs.

[00:02:09] I love income producing. I love having some income. I think everybody should do it if they, if they can stand living with other people. But if you're living with your friends, family you still have, or your relatives, I guess I should say, you, you still have to figure out where's everybody eating.

[00:02:26] Where's everyone going to sleep. Whereas everyone we're going to have their downtime?  Do you have access to the outside by yourself?You know, can you get good internet? Do you have cell phone service, that kind of thing. And so we have some very interesting creative people in our midst. And, in addition to just having the large house with lots of bedrooms, one of our, Clients came up with buying a really elongated ranch style.

[00:02:53] A ranch style is a single story, just kind of long rectangle house, super popular in the seventies. Well, so this gal, older and has couple of generations living with her and they just bought this really long, extra long ranch style. And she's got this one third at one end. And she has like a little mini bar in there and a little way of heating tea and popcorn and stuff like that and access to her outside.

[00:03:19] And then the middle is, kind of the young adult that lives there. Just kind of a bedroom has access to the kitchen. Everybody has access to the kitchen and, and the group living room, but, he kind of comes and goes, he's in school, you know, finishing school. And then at the other end of this long rectangle ranch style is the, the middle-aged person kind of like my age and they have their own little mini bar too, and their TV and their access to the outside and it's working out great.

[00:03:51] Everybody has their separate space. The construction was surprisingly affordable and it, and it wasn't a severe surgery, so to speak. So that is one idea I wanted to present. There's also the idea of, instead of having one big giant house, one of our, multi-generational families called last night and said, hey, this weekend, instead of looking at big houses, let's go look at several little houses.

[00:04:18] All you know, kind of close to each other. I thought that's a stellar idea. So each person actually gets to pick their own house. It's going to cost about the same. And, yeah, there's, there's definitely pros and cons to that. And if you're looking for estate level resale in 10 or 20 years, I can run those numbers.  I can run those estimations for you.

[00:04:42] So yeah, and, and those smaller houses, I think if you do end up making them rentals, it's easier, definitely easier. So just wanted to throw out a couple of different possibilities that, we're, we're discovering along the way. And, again, if you've got any questions or concerns this weekend, you want to talk about any of this?

[00:04:59] Just give me a holler I'm around all weekend. My number is (541) 301-7980 Now let's touch quickly on the stats because I know everybody feels like it's a seller’s market, but lurking underneath is a lot of back on market and people giving up. And so I just wanted to mention that this week in Klamath County, Klamath falls, they had 63 new listings, but 13 went back on market.

[00:05:52] Okay. I'm just telling you the rumblings are there. Here we go. It's happening. Even as we speak, Josephine County had 43 new listings. They had 14 back on the market and six give up, but they had of the 43. You know, new listings, 44 went pending. So there, you know, this week they're experiencing more of a shortage, but that's what transitions look like.

[00:06:18] Not every week is the same. It's in fits and starts some weeks. There's going to be a lot more listings and not as many sales, some weeks, it was going to be a lot more sales and not as many listings, but that is the definition, of a transition market. So there you go. Let's see, Jackson County had 126 new listing, but 28 back on the market and nine gave up so hundred 26 new listings, 126 pending that hardly ever happens.

[00:06:48] 92 closed sales. So yeah, so that's super interesting. Hundred and hundred 26, new 92 closed, nine gave up. And 28 went back on the market and that is Jackson County. So let's look at some average numbers now in Klamath County, the median sales, which if you, if you're a math person, that's different than an average.

But the median sale is $147,000 in Klamath County. Josephine County is 366 and Jackson County is three 87. Now I know there's a lot of big numbers being thrown around and it depends on how you run the numbers. And it depends on which, market. Or sub-market you're talking about. So there are some neighborhoods where the average or median price is 570, not 380 in Jackson County.

[00:07:44] But, I'm trying to give you a broad spectrum peek into what's happening so that you can make your own decisions and make your own predictions. And all of my numbers are run on a residential, three bedroom, two bath, 1500 square feet to 1700 square feet. And we are talking to our marketing people back and forth every week.

[00:08:07] Do we want to change that criteria? It'd be a little bit broader, but right now that's, that's kind of what we're, that's what we're pulling and, I think it reflects the experience at least I'm having in the market. Our fixer upper prices in Jackson County are somewhere between 303 to 320.

In Josephine County, the fixer prices are kind of fixed prices two 80 to three 10, and Klamath County is more like 90. 90,000. So, yeah. So interesting week, we are finally getting more listings. Thank you to everybody who put their house on the market this week. I hope you're having a good experience. We still have, a lot of landlords divesting their, portfolios.

[00:08:56] I think that is a coming soon problem. We're going to have to start really addressing what happens to all these poor tenants. We do have many tenants just leaving the area. But there's a downside to that too. So, but it just creates some interesting dynamics, but, yeah. So keep an eye on that for you too.

[00:09:17] So again, I'm around all weekend. If you need some help, you want to chat, you've got some questions. Give me a jingle (541) 301-7980. Otherwise just have an absolutely fabulous weekend here in Southern Oregon. It's the best part of the week is getting out and enjoying the biking and the hiking and the fresh air and each other.

Thinking about buying a house for a multifamily set up? Look at properties 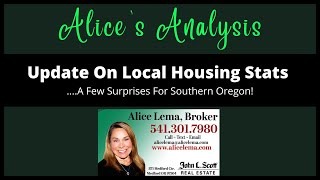 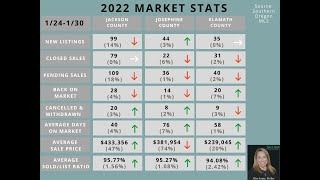 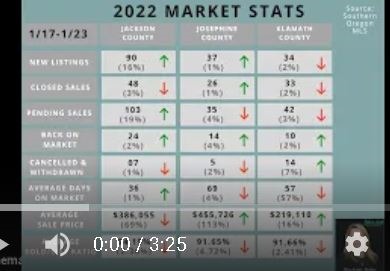